In this page, we are going to demonstrate how to setup a simulator on OACIS.

In order to execute an existing simulator from OACIS, the simulator must be prepared to conform to the requirements by OACIS. For example, OACIS gives input parameters to simulators by command-line arguments or JSON. You must prepare a small script in order to adjust the interface of input parameters. In this page, how to prepare a simulator as well as a few samples are demonstrated.

First, the job execution sequence are explained in detail.

When you register a simulator on OACIS, you save the command line string, not the execution program itself. By this specification, OACIS can run various programs written in any programming language. It also means that the simulation program must be compiled on computational hosts before submitting a job. OACIS generates a shell script including the command line to execute the program. We call this script “job script”. For each run, one job script is created. Job scripts created by OACIS are submitted to the job schedulers (such as Torque) on computational hosts via SSH. Just before submitting job scripts, a temporary directory is created for each job. We call it “work directory”. Jobs are executed in their work directories. Work directories are created under the “work base dir” directory which was specified when registering a computational host.

Here is the summary of the job sequence.

First, OACIS login to the computational host and create a work directory for the job. Then, put _input.json file if the simulator’s input format is JSON. This file contains the input parameters for the job.

When a job script is executed, it records various logs to files in addition to the simulation execution. For example, execution date, executed host, and elapsed time are recorded. To record this information, shell commands like date, hostname, and time are used. These logs are stored in _status.json file. This file is parsed when jobs are included into OACIS database.

After the simulation finished, the work directory is compressed into a single file. By compressing the result, we can reduce the time to download the file.

To execute a simulator from OACIS, simulators must satisfy the following requirements.

We are going to show a few samples for wrap scripts.

Suppose you have a simulation program which has four input parameters. You can set these input parametes by command line options. Let us assume that the options to set parameters are “-l”, “-v”, “-t”, “–tmax”. In addition to these, we can set the seed of random number generator by the “–seed” option. A command for this simulator would look like

You can not run this program directly since the format of the command line is different from the one given by OACIS. To adjust the input format, we prepare a shell script wrapper.sh as follows:

The tips for this script are

Let us consider another example. Consider the case that your simulator reads input parameters from an XML configuration file.

Here we assume that the simulator reads its input parameters (say “length”, “velocity”, “time”) and one random number seed from the XML file. You specify the XML input file as an argument of the execution command.

For example, a configuration XML might be as following.

To run the program with this XML, specify the path to the XML file as a command line option as follows.

In order to execute this simulator from OACIS, we prepare a wrap script wrapper.py written in Python. When registering this simulator on OACIS, let us set Input type to “JSON” because reading a JSON file from a python script is easier than reading command line arguments. We assume that wrapper.py is located in the same directory as the execution program my_simulator.out.

The script wrapper.py looks the following.

The sequence of the Python script

The following is the list of items we set when registering a simulator.

Required fields are indicated by (*).

When you enter Definition of Parameters fields, make sure that the specified type and the default value are consistent with each other. For example, if you specify a string value as a default value of an integer field, you get an error and are required to fix the inconsistency.

New in v3.8.0 Object is available as a parameter type since OACIS v3.8.0. You can specify a free-format object in JSON.

Command is the command to execute the simulation program. This string is embedded in the shell script, which is submitted to a job scheduler of a computational host. Since each job is executed in a work directory, the command must be specified by a full path. In order to make the command executable on various hosts, we recommend to use the relative path from the home directory. (Example: ~/path/to/simulator.out)

If you enable the checks of Support MPI or Support OMP when registering a simulator, you can specify the number of process or threads when making a Run. The fields to specify these numbers will appear.

If you enable the MPI option, the number of processes you specified when making a Run is set to the OACIS_MPI_PROCS environment variable. For the Command field of the simulator, the mpiexec command which refers to this environment variable must be specified. The following is an example of such commands.

Some simulation programs require a pre-process before doing an actual simulation. For example, a simulator may require preparation of an input file or may require the copy of some libraries to a proper directory. However, it is ocassionally impossible to do such a pre-process in a job script.

To avoid such issues, OACIS provides a way to define a pre-process for each simulator. This pre-process is executed on the OACIS server (called “local pre-process”, available since v2.12.0) and/or the login node of the remote host (called “pre-process”) before submitting the job. Therefore, you can avoid the problem described above.

The detailed execution sequence of “local pre-process” is as follows.

The detailed execution sequence of “pre-processes” is as follows.

After these pre-processes finished, the job script for the Run is submitted to the scheduler.

Although the simulator’s output files are stored in the file system by default, you may save some scalar value results in DB. You can instantly plot the values saved in the DB using the web browser interface, which helps you quickly see the parameter dependence of the result values. For example, you may wish to save the average or variance of some time series data.

To save the values in DB, you just need to save the values to _output.json file in JSON format. If your simulator writes _output.json file in the work directory, it is parsed and the contents are saved in the DB when OACIS includes the job result. In case your simulator does not write a JSON file, you can convert the output format in your wrap script.

For example, you can save the output as follows.

(Warning) Because of the limitation of MongoDB, you can not use a key including “.”.

You can see the stored values from the pages of Runs. 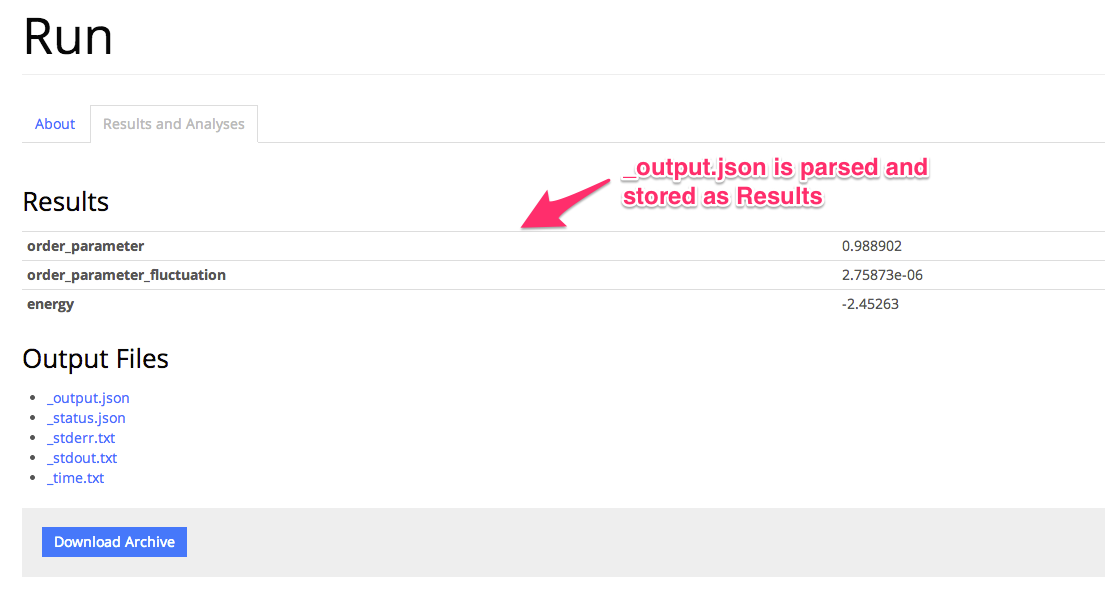 If you click a “Plot” tab from the page of ParameterSet, you will see the page to display plots.

Select the type of plot, x-axis and y-axis. OACIS will collect the relevant ParameterSets and plot the average for each ParameterSet. If you drag a mini plot displayed in the right bottom region, you can magnify the plot. You can also switch scale (log or normal) of the axis. If you double click the data points, the page for the corresponding ParameterSet are opened. Each url has a unique url, with which you can reopen the current plot. 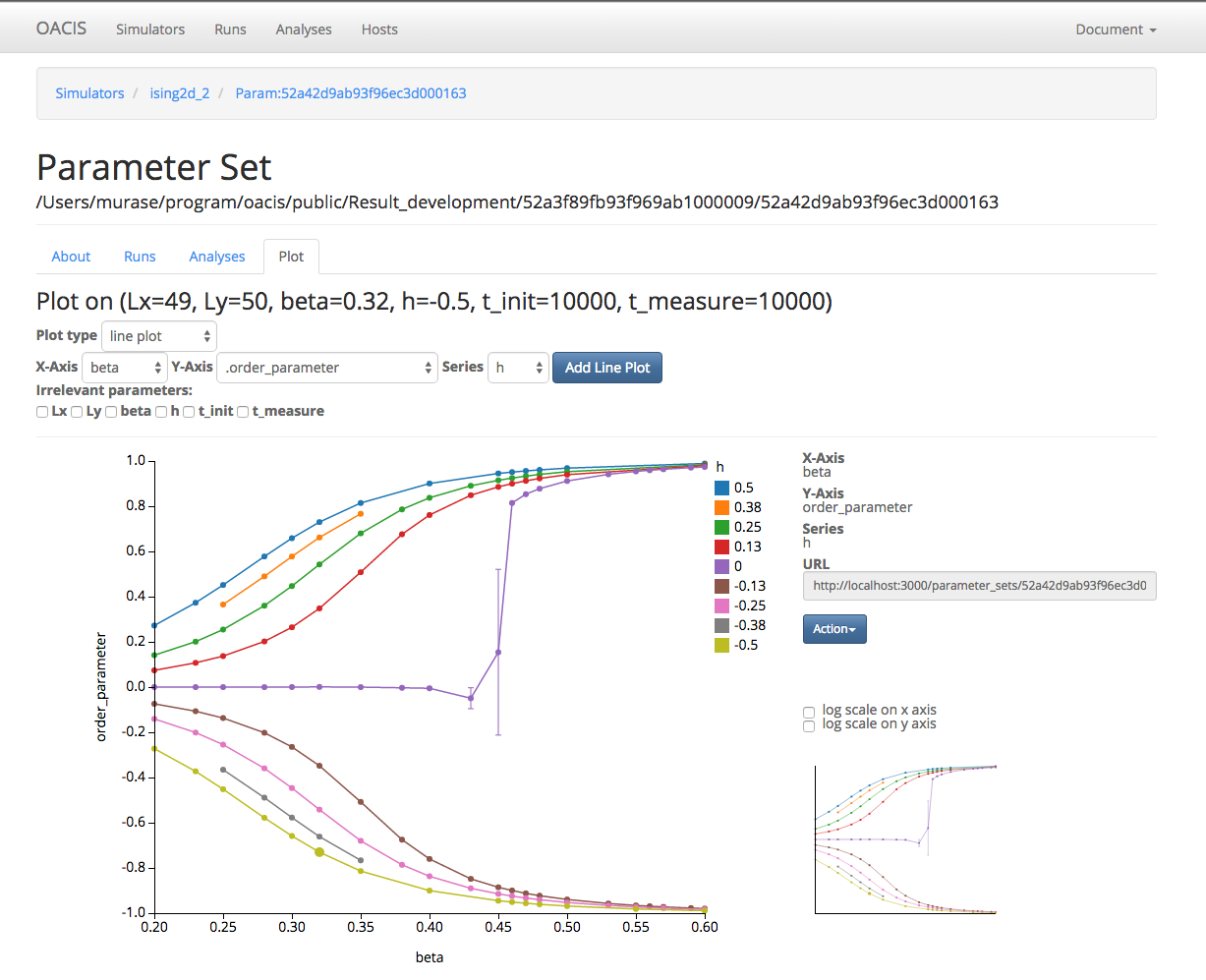 This is useful, for example, when you find a bug in your simulator while conducting a series of jobs. Probably, you wish to delete or re-execute the Runs conducted with an inappropriate version of the simulator. If you have recorded the simulator version for each job, you can efficiently find the jobs which must be re-executed by the version information.

When you register your simulator on OACIS, fill in this command to Print version command field. OACIS will embed this command into job scripts, and the standard output of this command is recorded as the version information in OACIS.

You can delete or replace the runs having a specified by version at once using the command line interface (CLI). Please refer to the page for CLI for details.